skip to main | skip to sidebar

Niagara Rally Against Prorogue of Parliament by Harper 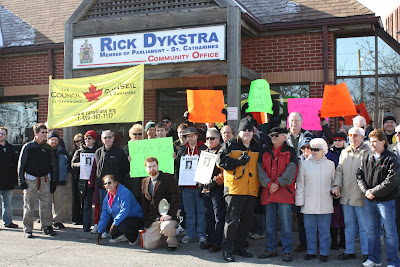 St. Catharines & District Labour Council delegates were prominent among the 50 or more people who rallied outside Tory MP Rick Dykstra's Constituency Office in St. Catharines at noon on January 23, 2010. They joined tens of thousands of others who took part in rallies across the country. The local rally was followed by a short march. The event concluded with the participants taking part in a big group photo in front of the constituencey office of the awol St. Catharines Tory MP. Local media representatives were conspicuously absent at an important event held on a day that was part of Canadian political history. 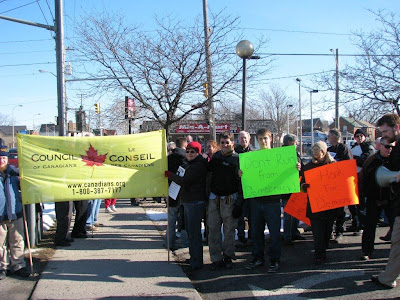 The St. Catharines & District Labour Council is the largest central labour body in Niagara. It combines the strength of dozens of local unions representing thousands of working women and men in virtually every sector of the local economy. Its mandate is to organize and advocate on issues that are vital to working people throughout the region, and to carry out local campaigns for the Canadian Labour Congress.

Labour Council meets the first Wednesday of the month at 7PM at the CAW 199 Hall on Bunting Road.